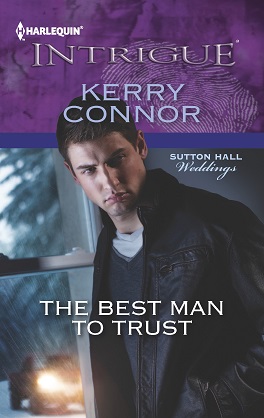 Wedding planner Meredith Sutton has a lot riding on the next wedding at Sutton Hall. She’s prepared for everything…except seeing her old college crush in the wedding party. But not even Tom Campbell can throw Meredith off her game. A killer, on the other hand, might mess things up…

Trapped in the midst of the fiercest blizzard the isolated mountain town has ever seen, the guest list becomes smaller by the day. And when Tom becomes the only person she can rely on, Meredith can’t help wanting one last chance at love. Since they might not be alive once the storm breaks…

Excerpt
Click here to read an excerpt from Chapter One.

About the Book
THE BEST MAN TO TRUST is my final book for Harlequin Intrigue, and the one that means the most to me. It’s the kind of story that made me fall in love with the line over two decades ago, the kind I’ve always wanted to write, and the kind Intrigue doesn’t really publish anymore. It’s an old-school whodunit with a large cast of characters trapped in an isolated location, full of suspects and old secrets. It’s a love story between a woman and the last man she ever would have expected, who’s exactly the man she needs. And it’s the story of a woman who learns she’s far stronger than she ever believed or gave herself credit for. This is the Intrigue of my heart, and I hope readers enjoy it.

I’ve generally had very good luck with the covers of my Intrigues. Unfortunately, this one is a complete bust. The hero of this story is blond and incredibly good-looking; I requested a blond guy in a tux for the cover (to go with the wedding theme). And I got…this guy. I don’t know who that is (certainly not the blond hero). I don’t know why there’s a truck approaching outside with its lights on when the characters are snowed in, completely cut off with no way for anyone to get in or out. I don’t really understand this cover at all, and wish this story had a better one. I hope the cover won’t negatively affect anyone’s ability to enjoy the book–and to picture the hero as he should be.