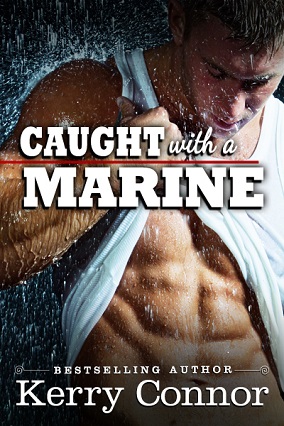 SHELTER FROM THE STORM

Casey Meyer has spent months steering clear of her smoking-hot neighbor. The rugged Marine is definite fantasy material, but his cool aloofness clearly says “hands off.” He’s too serious. Too intense. Too everything. But when she finds herself locked out of her apartment on a rainy night, the last man she ever would have expected offers her a place to wait out the storm…

Nick Calhoun knows better than to get involved with a neighbor. He’s done his best to keep his distance from the women in the building—especially the all-too tempting brunette who lives just a few doors away. But he couldn’t leave her out in the rain—and resisting her once she’s in his apartment may be just as impossible. As the night goes on and the two wary strangers get to know each other, it starts to seem worth taking the risk for just one night…or maybe many more…

About the Book
If you’ve read the first Night Moves novella, I know what you’re probably thinking: “Really? Another story set on a rainy night? Get a new idea already.” Caught with a Marine was actually written before Tempted by a Marine, which originally had nothing to do with a storm. I had the hardest time getting that story to work, and ultimately was only able to get it to by having it take place on a stormy night. That left me with the question of what to do with this story. I finally decided to release it as is (with a few minor edits). After more than seven years in Southern California, I can attest that a good storm is rare enough that it would be a shame to waste one on just one story!

After writing a number of heavy, really emotional stories, I wanted to write something light and fun. Caught with a Marine is the result. I hope you enjoy it!