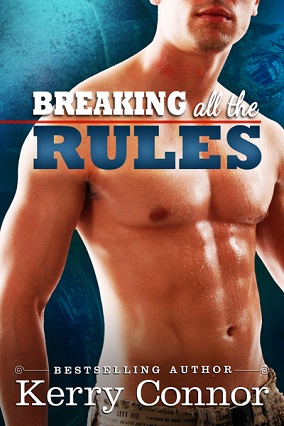 FROM NO STRINGS
TO ALL TIED UP IN KNOTS

It was a perfect arrangement. For three years Nina Warren met up with U.S. Marine Bobby Dellucci for fantastic, no-strings-attached sex whenever he was in the country. No drama. No expectations. Just fun. But when Bobby returns from his most recent overseas deployment, he wants to change their deal. He’d like to get to know her better and see if they can have something more.

“Something more” is exactly what Nina doesn’t want with him. A military brat who grew up moving around the world, she isn’t interested in dating anyone in the service. Fiercely independent, she knows what it’s like for her life not to be her own, and she doesn’t want that anymore. She already broke her rule getting involved with him at all. But Bobby isn’t one to give up easily and he’s willing to fight for her—for them.

About the Book
BREAKING ALL THE RULES is a story that took almost ten years to see the light of day. I first began working on it in the fall of 2004, a time of war when global conflicts were obviously on everyone’s minds. I was thinking a lot about the troops being sent overseas. I had this idea about two people who met for one blistering night of passion before the hero was deployed and a casual relationship made up of stolen moments between the times when he was called away. I thought it had the potential for a story that was both really sexy and deeply emotional, and I was immediately excited about it. The first few chapters are still some of the fastest I’ve ever written, as I couldn’t get the words down quickly enough.

Romance novels involving a heroine who doesn’t want to get involved with someone in the military (or in law enforcement) aren’t exactly uncommon. It seemed to me that in most cases it’s obvious she’s just going to cave in or change her mind in the end (especially since, all too often, it’s the woman who ultimately has to sacrifice everything she wants and is, while the man gives up nothing), so the reader is basically just waiting for her to do so. I wanted to tell a story where it wouldn’t be so simple or obvious, where the heroine knew her own mind and what she was capable of, had considered the options and had valid, logical reasons that wouldn’t be easily overcome or dismissed. I needed it to be a true conflict facing the characters. Of course, in presenting that challenge to the characters, I was also presenting it to myself. It took me a long time to figure out how they would deal with it and work through it without selling out either character, finding the resolution that was truly right for them.

The story went through many changes over the years. The heroine was originally an attorney, until I came across what seemed like fifty million books involving a Marine hero and lawyer heroine. There was originally a suspense subplot, where one of the heroine’s cases put her in danger, and the hero had to step in. The heroine’s best friend used to have a romantic subplot of her own, with one love interest in the version where she and the heroine were lawyers and a different love interest in the current version where they own a bakeshop. The hero had a subplot where he was helping the widow of one of his fellow Marines who was killed overseas pack up her house, which felt a little too similar to the Jackie subplot that remains in the book. And of course, as the years went by, I had to make alterations to reflect changes in the real world. Through it all, what remained was the core story of these two people with a powerful connection and a real conflict/obstacle keeping them apart.

The book experienced a lot of false starts and stops over the years, times when I thought it had found the right home and would finally be released, only to have it not work out.  I’ve lived with these characters so long that it’s really exciting—and a bit of a relief—to finally get to share their story with others. I hope readers will come to love them as much as I do.