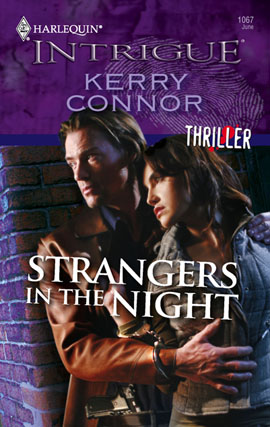 IT WAS DARK, IT WAS LATE
AND THEY WERE TOTAL STRANGERS

Caught in a Chicago alley crossfire, Allie Freeman was running for her life when she slammed into Gideon Ross. A hardened bounty hunter, his job was to discover why this stranger—no different than the girl next door—was so highly desired. But unraveling what made Allie so special would take more time than he had.…

Being drawn into this wanted woman’s life had turned Ross into the hunted. Allie’s hidden identity exposed them to a relentless killer—one, inexplicably, she was willing to die for. But she didn’t know the lengths Ross would go to keep her unharmed. He wasn’t willing to share her with anybody, and in this game of survival, whoever keeps their secret the longest, wins.

Behind The Scenes
STRANGERS IN THE NIGHT was originally written as a much longer story, with another major villain, several more layers of conspiracy, additional plot twists and many more characters than appear in the published book. I had to cut a great deal to make it the right length for Intrigue. The main characters’ storyline and most of their scenes remained the same, with a few trims and combined scenes, but everything around them had to be greatly reduced.

It wasn’t easy revising the plot in a way that it still held together, reconnecting the remaining dots in different ways and having events unfold differently, although 90 percent of what appears in the published book is as it was in the original version. This was a story I loved writing, and even with the cuts, I’m pleased with how it turned out. I’d love to see the full version published someday, but I’m still thrilled that this story gets to see the light of day as my first published book.

Deleted Scenes
(These scenes may contain spoilers for anyone who hasn’t read the book, so should be approached with caution by those who don’t want to be spoiled beforehand).

In the published book, there’s a bit of a time jump between Chapter Six, which takes place in the morning, and Chapter Seven, which picks up that night. There were originally several additional chapters in between. For a taste of these chapters, and an explanation for why they were cut, click here.

Chapter Nine of the published book finds the main characters driving across Pennsylvania in a used car they bought earlier that day. For a deleted scene showing them buying the car, click here.