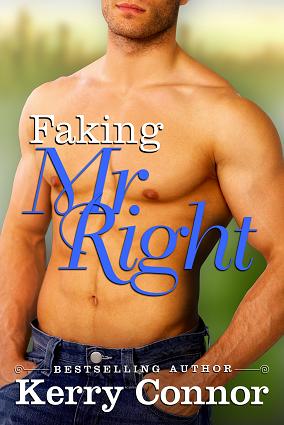 Who is the perfect man?  Ad executive Melissa Brock might not know the answer, but she does know it’s not Sam Curtis. But with time running out and no flawless male specimen in sight, Mel has no choice but to try and pass off the former soldier as the real thing for her next campaign. Her business partner claims Mel only needs to “smooth out Sam’s rough edges,” a comment that has her reaching for a sand blaster. Confident, irrepressible, and sexy as hell, Sam has an unerring talent for finding trouble and more appeal than any man has a right to possess. Against her better judgment, she finds herself falling under his spell. But Mel has to wonder:  is she falling for her own Mr. Right, or under the hype of her own campaign?

About the Book
FAKING MR. RIGHT is my first romantic comedy. While romantic suspense is my first love, I’m also a big fan of stories that combine fast-paced dialogue, laugh-out-loud scenes and heart-tugging emotion. This book began as my attempt to write one of my own. I really loved these characters, and telling their story was one of the most purely fun writing experiences I’ve ever had.

Sadly, when it was submitted to publishers in 2002, I was told that romantic comedies were becoming less popular and there wasn’t as much of a market for them, especially from a new author. So I set the book aside and concentrated solely on romantic suspense, finally selling my first book, STRANGERS IN THE NIGHT, several years later.

Even as I continued writing suspense, I never forgot about these characters and hoped that one day I’d get to share their story. More than ten years after it was originally written, that day has finally arrived!  The book has been updated to reflect changes in the times, and revisiting it reminded me how much fun it was to write.